Well, here we are in Luperon, sitting at a bar/cafe called JR and getting the down low from a local named Manny, drinking a bottle of rum, all the coca-cola, ice and lime that you want for $6.   Life is good!

﻿ We left Staniel Cay about a week and a half ago and had a nice sail to West Plana Cays, where again, we had to pull in for 3 days and wait for weather. West Plana is a tiny little island out in the middle of nowhere that had the most pristine beaches, a blue hole in the interior and lots of reefs. Niko especially liked the island, as there were tons of goats which she chased, cornered and then barked at for hours. That was especially fun when she did this when Maria took her in for the last time, about 20 minutes before we were leaving, and Niko took off, no one could find her, and Maria, Scott and myself had to battle the spiny trees and the heat in the interior of the island as we searched for her. Needless to say, we left 3 hours late! Anyway, we had a great 3 days…lots of snorkeling, surfing and hanging out. Scott caught us a huge strawberry grouper for dinner (I did catch the bait fish that was sacrificed for the grouper…Scotto is now having fun calling me the Master Baiter…) anyway, we also found a bunch of conch and made a great conch salad. We did see a few lobster, but we couldn’t get them. 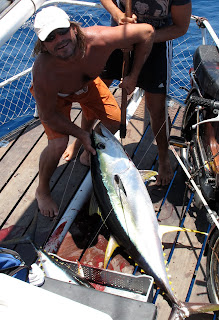 We left West Plana with a northeast wind until full sail, and not one hour after we left, we got a hit on one of the two fishing line we had put out off the bumkin (or as Scott, forever the sportfisherman calls it, the Pit). So, Scott grabs that line, and yells to me to reel in the other line…which we quickly realized also had a fish on. I felt the weight on the line and am no dummy, so I quickly passed the rod off to Maria and I took over the helm. Maria had little trouble getting the fish to the boat, and to our delight, it was a 50 lb yellow fin tuna! AWESOME – sushi! Meanwhile, Scott is fighting what we think is a marlin…until he finally gets it in an hour later (after a shark tried to get it but didn’t) and holy cow, it is a HUGE yellow fin tuna…Maria and Scott could barley bring it over the rails and onto the boat – we estimate it to be about 130 lbs! I’ll send pics at some point. So, now we have 180 lbs of tuna on board and no way we can eat it all. There are about 4 boats on the horizon and we radio them all to see if they want to do a mid-sea handoff of the tuna (really, we would have put a trashbag full of air tied around the tuna and dropped it in the ocean for them to come by and grab with a hook), but the seas were running 4ish feet and no one wanted to try it. So, needless to say, we have been eating tuna for breakfast, lunch and dinner!!
﻿﻿﻿﻿﻿﻿﻿﻿﻿﻿
We had a great sail from to Luperon, DR. They were calling for light winds and 4-6 foot seas, but instead we saw NE winds 17-20 with 3-maybe 4 foot seas. We were cruising about 5-6 knots and only put the engine on in order to go a little faster so that we could make it into the DR b/f customs and immigration closed.  So, we got into Luperon, dropped anchor, and then Scott and I were sent in to clear in because between the two of us, we may be able to come up with one sentence in spanish, and by the way, his accent is no better than mine. So, we found the “government compound”, which is a concrete building with a series of 10×10 rooms that are falling apart, a desk from the 1960s and maybe 1-2 chairs. First we went to immigration. There we showed our boat papers and passports and paid $50 to clear in the boat and $10 per person. Then he told us we had to go see the harbor master next door, where we showed our boat papers and passports and paid $10 to enter the harbor and $10 per person tourist fee. Then they told us we had to go next door to see the dept of agriculture, where we had to show our boat papers and passports and pay $10, for , well, not really sure what for. By the way, all of the communication is taking place in Spanglish and hand signals and smiles, but obviously, not big enough smiles. Then we had to go up the hill to see the Captain of the Navy. Well, we showed up at the wrong time, as he and his officer-in-training were sitting outside the official building, on a hill, on a picnic table, overlooking cows, and the Captain was reading something from a piece of paper, and his officer in training was taking dictation. They welcomed us and motioned for us to sit down. Which we did, for about 2 hours and the Captain continued to dictate an official report regarding a fellow that was having problems with another man, the other guy apparently entered his house and the owner pulled out a 38 and shot him dead. Lovely. Once one hand written report was re-written, very, very slowly, to an official handwritten report, we were escorted inside the building, where it took an additional 2 hours for the officer to fill out 4 lines on a clearance form. Then, we had two representatives of the Navy come out to our boat to inspect it (ie walk around and say “muy grande” (very big)). And thus, the clearing in process was complete.

Of course, after such an experience, we had to go ashore and discover you can get 32oz beers for $1 and a meal of rice, beans, chicken and plantains for $2. All the locals are super friendly and helpful. We have managed to drop off laundry to get done for us, lined up a van, driver and 15 year old tour guide of Santiago for provisioning and exploring on Monday, and Scott sold the rest of the Tuna to a restaurant owner for $50 plus our bar tabs! Not too shabby. I could stay here for awhile, but our friends Frank and Dustin are meeting us in the USVI on May 25 so that we can meet up with the in Jost Van Dyke, BVIs on May 27. That is going to be crazy!

Well, these are our adventures thus far…many more to come! Check out facebook page as well (Sail Joana)