This will be my third time to Grenada and Cath’s second, but there is always something new to see.  We chatted with our friends Diane and Wade on s/v Joana, yet another Joana and yes, she is from Canada as well.  They said they had not done a land tour yet so, they talked to one of the taxi drivers they knew and he agreed to give us a tour and picked us up at Port Louie Marina with his van.  Nola and Jerry from Moonsong and a friend of theirs, Bill from s/v Magnolia came along as well, so we had a good group for an entertaining day.  Jerry and I joked that we hoped we didn’t have to take any one out of the ditch this land tour, like we had in Dominica!
We all piled in, first stop, Fort George.  From the top of the hill where the fort is, we had great views of the Carenage and the lagoon.  With our first fix of Grenadian history, we were off to waterfalls.  After a great drive through the countryside we made it to the falls.  It was a hot day so is was a beautiful treat to jump into the cold fresh water.  Gail told us this was the first time she had ever swam in a waterfall – pretty amazing after all the places she has been!  One of the locals cut open a coco bean for us to look at –  surprisingly the jelly around the bean is quite good. 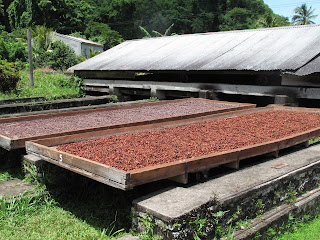 We rallied the group and off we went to the cocoa factory with a quick stop at Leaper’s Hill, a cliff where the local Indians had jumped off the edge rather then surrendering,
The cocoa factory used to supply most of the chocolate for Cadbury but now it is used more as a tourist attraction.  We had a great lunch there with local fish and meat, callaloo (tastes like creamed spinach) and great desserts.
We got back in the van with bags full of chocolate samples to try.  Of course we had to finish them all before they melted- at least that was our excuse!  With full bellies, it was time for rum tasting.  Rivers is the oldest rum distillery on Grenada and only sold on the island.   It has one of the oldest water wheels in all of the Caribbean, turning fresh water from the volcano lakes.  With walls of sugar cane husks marking the trails through the distillery, we made our way to the boiler-room that had with massive old bronze casts and ladles 6 feet long.  It was very rustic, and I really don’t think it would have passed a US health inspection!
We finished the tour at our favorite place, the rum tasting area!  I came in to the tasting room last so I missed the description of the first glass of rum that was handed to me.  I should have known from Cath’s expression that it was the over proof.  Instead of taking just a little sip, I downed the whole thing, unaware.  The last time my insides felt like that was in China town in NYC after eating on of their hot peppers!  But, as I was taught, once you’ve swallowed it, it’s yours to keep.  After the initial burn went away, I was feeling great.
Most of us selected their passion fruit flavored rum to buy after we had tasted all of them.  They the bottled the rum right in front of us and caped the bottles on site.   It was very cool to see the whole process start to finish.
With our body full of the local brew, we were off to see the volcanic lakes of Grenada, which are mostly used for reservoirs. The lush forest and small villages that we passed along the way home were a treat to see.
The next day we wanted to relax after the long day tour, so we decided to have a beach day at Grand Anse.  It is a two-mile long beach with white sand, clear, turquoise water with palm and almond trees planted along a white picket fence for shade.  We swam, tanned and then had a great lunch right on the beach.
The next morning we decided to snorkel an underwater sculpture park.  Although the water was a bit murkey, we could still see the sculptures below us in about 15-20 feet of water.  The sculptures were spread out, so you had to swim around to find them all.  There was a mermaid, a man typing at a desk, a vase of flowers on a table, a circle of people and many more.  It was really neat!
The following day, we went into St George’s, walked around the Carrenage and did some shopping.  We found the local veggie market and Gail re-supplied Joana with local spice rum.  We also made sure we found the spice market so Gail could stock up on gifts before she had to head home.
With our land tour checked of the list and a few days checking out  St. George’s area, it was time to head over to Mount Hartman, where we would be sitting for the hurricane season.
We were lucky that Wade and Diane had already been in the bay for a month, so they had most of it scoped out.  We pulled in around noon with them on the radio to say where the best place to drop would be.  The anchorage was a bit tight as we had to maneuver between four boats and three moorings, and it was the moorings I cared more about.  Too much chain meant the mooring getting buggered up in the rudder.  After three anchor drops to get the scope just right, we were in our new long term parking.
Well, our crew member Gail’s time in paradise had come to an end and had to head back to her condo on the beach…if you have to leave paradise, a place on the beach isn’t that hard to go back to!
The next morning, we got up at 7:30 to listen to the cruisers net on the VHF to see who we would be living next door to for the next three months.  “Treasures of the Bilge” the guy says over the radio. A fella comes on, gives his boat name, and asked if anyone would like to buy his wife as she is old crotchety lady!  The same guy, whom we would learn to know as the Drunk Norwegian, later tried to sell an AK-47 over the net – might not be such a good idea as customs sometimes listens in!  Oh boy, this is going to be an interesting couple of months.
That evening, we took the dingy over to Hog Island to Roger’s beach bar and met some more cruisers and locals.  I will close with this visual… we counted about 25 dingies lined up on the sand, a ramshackle beach bar serving ice cold beer, everyone chatting about boats or something of  interest and a guy telling me there is a surf break not to far away. As the sun was setting on the masts in the harbor, I looked around and decided there could be worse places to be sitting out hurricane season.