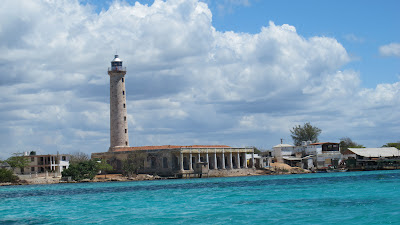 We had about 35 miles to sail to our next anchorage and were anxious to get an early start.  We had told the Guarda that we wanted to leave by 8am, and he said he would come out at 7am to give us our necessary paperwork.  He got there around 7:30 and apologized a few times and told us his gua-gua (taxi) was late.  All he did was sign a box on our cruising permit and hand it back to us – it took only 2 minutes.  We heaved up anchor and had a nice motor sail to Cabo Cruz.  The wind was directly behind us and a little too light for us to totally sail, but we only had the engine going just above idle so we didn’t use too much fuel.
As always, we had our fishing lines out and we were rewarded with a nice sized Mahi.  Yeah – fresh fish for dinner! 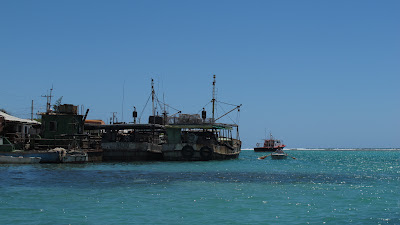 We had been warned by a fellow cruiser with a 7 foot draft that Cabo Cruz was a little tricky to anchor in, but we found no real problems.  You anchor between a reef and mangroves – so you are staring out to nothing but ocean but the reef breaks all the swell and you get an awesome breeze!  The water is Bahamas blue with some grassy spots but mostly white sandy spots to anchor in.
I had read in the cruising guide that the Guarda may or may not come out to see your paperwork, and in our case they did not.  Tomorrow we are planning on going into town to explore a bit and the guide states that you need to find the Guarda in town if you do that. 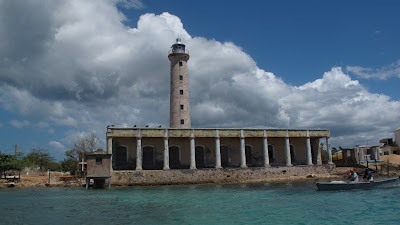 We had a few fisherman come over wanting to trade lobster for rum.  They only had one giant lobster and two very small ones, and we told them we wanted a few medium sized ones.  They told us they would go get them tomorrow and bring them over to us once caught.  Gotta love it!
We had Sabbaticus over for a fish and Conch dinner with a movie – a great way to end another great day in Cuba!
We decided to stay two extra days in Cabo Cruz.  We tried to go to shore but the Guarda told as soon as we tied our lines to a “dock” that it was “no possible” and basically shooed us back to our boats – but he did it with a smile!  So much for our guide book stating we could go ashore…maybe it was just us!  That’s alright, we did some snorkeling and speared a lobster.  The reef was super colorful with lots of fish and great visibility.  If this snorkeling is so good, I can’t wait to get to the cays in the middle of nowhere!