We had a great sail from Cayo Zaza de Fuera to Casdila.  We chose to go on the outside and then cut inside via the Canal de Drenton.  Aside from the occasional shoal or coral head, the cruising here has been great.  Most of the time, we have enough wind to push our big girl (usually been 15 – 18 knots, at least in the morning before it dies around noon) and very little seas.  We have also noticed that the channels and shoals are very well marked. 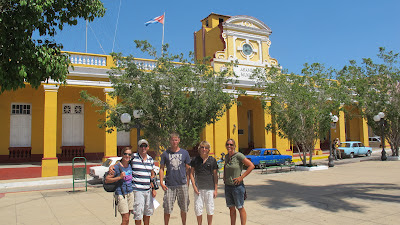 Our guide book had said to go to the fishing village of Casdila to clear in, and to expect the full range of officials, who could be bureaucratic,  to come out to your boat.  Well, we did as we read, but it was wrong!  Instead, we had to anchor across the bay by the Marina Cayo Blanco and cleared in at the marina.  The Guarda office is right at the marina and it is only one very nice guy there.  He came out to our boat to do his paperwork, did a quick check and that was it.  We asked him if it was possible to clear out the night before we wanted to leave and he said no problem.
We trucked to shore and decided to go exploring.  There really isn’t that much in Casdila except for a huge, 1960’s style, gaudy purple and orange all inclusive resort.  We went in to scoop it out, tried to order a few drinks but got denied because we didn’t have the special bracelet and they don’t except cash.  Meanwhile, Josh and Connor tried to play ping pong but got booted, as they too didn’t have the wrist bling bling.  However, on the way out, a very enterprising manager told us that he could make us a deal for the night.  For $10 CUC per person, we could have dinner and all the drinks we wanted.  Josh and Connor used their tough negotiating skills to work him down to $5 CUC for just drinks, as we had already eaten dinner.  The manager said okay and ran off to hunt down the elusive bracelets.  Well, Josh and Connor decided they didn’t need to spend $5 CUC, so they bailed back to the boats.  Kevin had decided to stay home in the first place, so it turned out to be girl’s night out!
We started with some mojitos, which were the worst mojitos we had ever tasted!  We next went to Cuba Libre (rum and coke) and they were pretty bad too.  No wonder why all-inclusive resorts are so cheap – they use the worst liquor possible!  We finally figured out that if we ordered the pina coladas and asked to put some sprite in it, it was drinkable.  We had a great time people watching and every night the resort puts on a “show”.  It was more like a freak show!  There were singers who thought they were Liz Minnelli, a guy vocalist that was trying to be a one-man Back Street Boy group, and then there were the dancers.  The guys frolicked back and forth on the stage wearing green wrestling outfits, while the girls tried to keep up.  It was extremely entertaining, especially after a few cocktails! 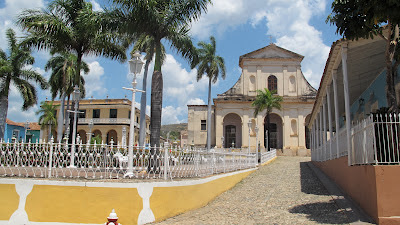 The next day, we got up early to make it in to Trinidad by taxi.  Trinidad is one of the oldest 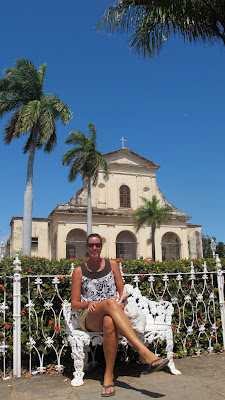 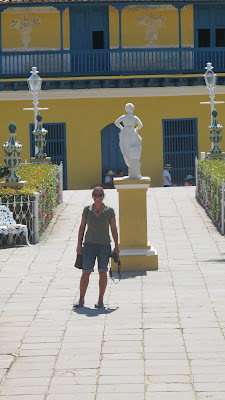 cities in the New World – it was first settled in 1514.  The city is a big tourist destination, so the streets are incredibly clean and the buildings all brightly painted.  We got dropped off in a beautiful plaza and just wandered around the small town.  Everywhere we went, there were locals selling all kinds of souvenirs.  We bargained with a lot of them as it is a great place to get stuff for family back home.  If you bring some used clothes that are in good condition or personal items like tooth brushes, tooth paste, razors, etc., you can trade with them as well.
After getting goodies for everyone, we set out to find a good lunch spot.  We found a nice restaurant with tables set up under a gigantic tree which provided ample shade from the hot afternoon sun.  We had cold beers and a good meal, which was made even better by a band of elder Cuban men belting out their traditional music. 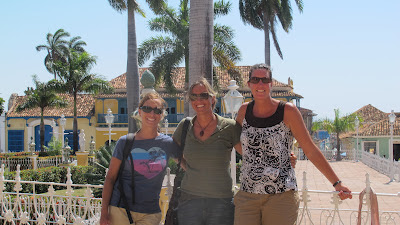 We strolled around the streets for the rest of the afternoon and then caught a bus back to the boat.  Trinidad is a beautiful city that is not to be missed!