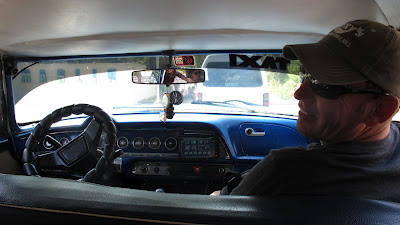 We had met fellow cruisers who were anchored next to us, Guilloum and Janey, the previous day so we had them over for coffee in the late morning.  They had been in Cuba for two and a half months and so gave us a little insight into where they had been.  Around 3pm, we decided to head back into town.  Josh and Connor had left earlier, so it was just me, Maria, Kevin and Dena.  We tried to take the local bus, but the times are fairly widely spread apart as well as being inconsistent, and we were told by three gentlemen by the bus stop that it was most likely two hours before the next one came.  We were trying to get to the fruit and veggie market before it closed at 5pm, so we opted to take a cab.  Luck for us, there was a 1957 Chevy waiting.  We negotiated a fare of 8CUC, got in, and then there was a knock on the window… two of the gentlemen that had helped us wanted a ride in…sure, why not, so we squished over and off we went.

As soon as we got back into town, we bee-lined it for the market.  It is basically a concrete building with different “stalls” where the locals set up their goods.  The prices were all the same between everyone, so we looked around to find the best looking veggies.  They had a great variety of stuff there – carrots, green peppers, pineapples, onions, tomatoes, potatoes, cucumbers, herbs – and all in local pesos.  We loaded up our bags and went down to the waterfront in search of the best 5 peso street pizza.  We found it – it is made in Pizza-Hut like personal pan deep dishes, then put in a mobile brick oven!  So good!
As we were walking back to the main square, we came across a very local watering hole…well, it was more like an alley with some tarps overhead (there was no roof) with tables and chairs underneath.  For 6 local pesos, we all had glasses of not-so-good local beer from a keg.  The glasses they served them in were actually the bottom of  Havana Club rum bottles with the top cut off – very cleaver.
Cheap as the beer was, we could only stomach two and headed back to the music festival.  We hung out close to it at a bar and again, sampled the mojito.  The verdict?  The first place still was the best, but this was a close second.  We stayed there awhile and Josh and Connor came back with 4 locals they had met and we all sat down and chatted for a few hours as one or two spoke English.  We were treated to another serenade by one of the guys who had his guitar.  Boy oh boy can they belt out some songs – they all seem to have beautiful voices.  At the end of the night, we went to pay our tab and it seems as if a few extra beers was put on it.  Our new found friends tried to argue with the bartender for us, but to no avail – it seems it is a local practice to do this to gringos, so, my advice is not to run tabs but rather pay as you go.  A good lesson for us, and luckily, not an expensive one as the beers here cost 1 CUC.
We were a little hungry by then and walked to a pretty little park in  a small square where there were street vendors around and got some fried chicken for 10 pesos.  Then we walked to a disco – Casa de Musica and peeked in to see if our friends from earlier were there – we couldn’t see them and there was a cover charge to get in.
We were getting sleepy so we decided to head back to the marina.  We were longingly looking at a great old green car, not sure the make of it, and the driver came up to us and asked if we needed a ride – we negotiated 8 CUC and off we went back to the marina. 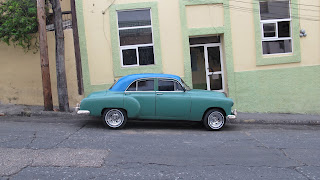 One note about Santiago – there are many people who will come up to you and ask for soap, clothes or money.  We did carry around some soap and gave away a few articles of clothes to those who we talked to for a little bit.  It started to get a little annoying, but we have heard that the “begging” is the worst in Santiago and not so prevalent in the other cities.  Just a heads up to expect it.