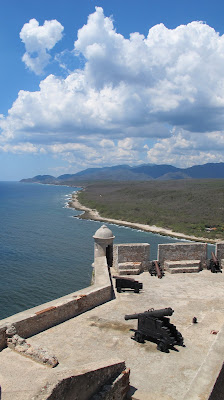 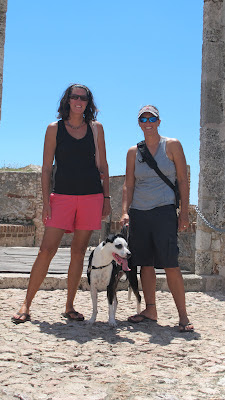 We decided it was time to keep moving and our next anchorage was 75 miles away, so we decided to leave around 4pm and do a quick overnight.
So, in the morning, we got a cab and went up to the Morro – a big fort on the hill that we had seen as we came into the harbor.   It was a very cool fort – well kept up and they had a nice museum inside.  We toured it for a good 2 hours then went back to the marina to start the clearing out process and show them my proof of insurance.  At first they still wanted me to pay, but after politely arguing with them and a few phone calls to their boss at immigration, they finally said I didn’t have to pay.  The rest of the clearing out process wasn’t as bad as I thought it was going to be– we just had to do some paperwork, pay our marina fees (it is 0.45 CUC per foot per day to dock at the marina and 0.25 per foot per day to anchor out) and pay for our cruising permit (15 CUC) which we received right before we left.  Then two officials came out to the boat to do a quick look around (took no more than 5 minutes) and we were good to go. 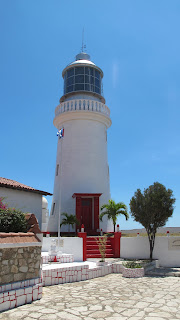 One interesting thing I did note is that the marina fees and cab fares from the marina to Santiago are the same exact price that Nigel Calder quoted in his cruising guide from 1999…I don’t think they have much inflation in Cuba!