Over the next few days, we Cay hopped, as most were only a 15 – 25 mile sail.  We would leave in the morning to catch the breeze before it died and would try to anchor between noon and 2:00.  We would then jump in the skiff to check out the coral and hunt for dinner.
We had read in another blog that Cayo Guincho had many lobster and the people had cooked their catch in a bonfire on the beach.  Well, I had pictures of a beautiful white sand beach, beautiful turquoise water with lobsters crawling all over the place.  This was not the case.  As with most of the cays in this area, the cays themselves are mostly mangroves and the water a little on the murky side.  They are still beautiful islands – just in their own right.
I was a little skeptical as we started our hunt.  Instead of one long coral reef there was just a few rocks and small coral heads scattered around sea fans and grass.  But, all is not as it appeared, as we looked closer under these rocks and found 6 small lobster and one giant one!  Oh yes, I forgot to mention the two big hog fish we speared as well – more than enough food to feed the six of us.  We decided that we would also have a bonfire on the small sandy area on the island, and sent Josh and Connor in first to start the fire to smoke out the no-see-ums that are on all the islands.  Dressed in long pants and a long sleeve shirt and armed with plenty of rum to keep the bugs away, or at least help numb the bites, we made our way to the site of the great feast.  What an awesome dinner it turned out to be!   Dena had made a huge bowl of potato salad, I had made a cucumber salad and we had also brought gobs of butter and garlic to melt on the fire.  We put the lobster tails in tinfoil, did the same with the fish and put them on the hot coals.  To say the lobster melt in your mouth doesn’t do it justice!
The next day, we sailed to Cayo Algodon Grande.  The anchorage is easy to enter, we never saw less than 10 feet of water entering into the protected lagoon that you anchor in.  We chose to anchor basically at the mouth of the entrance to take advantage of the breeze blowing in, which kept the bugs at bay.  There were two fishing boats also anchored in there and shortly after we arrived, they rowed over to ask if we wanted some lobster.  We said sure, and brought out a small (mickey size) bottle of rum.  They in return handed us a bucket of lobster tails…FIVE huge lobster tails!  What a trade!
The following day, we dignied around to the north side of the island and discovered a beautiful series of beaches, all half-moon shaped with the white sand and water that went from turquoise blue to emerald green  that I had been hoping for.  We let Niko romp on the beach for a while and she discovered that the islands were in fact, not uninhabited.  Away from the perfect beach, the mangroves were the homes to many, many iguanas and juantas which look like muskrats!  Niko rushed in after them, barking and yipping, and luckily, not catching them.  We went back to the boat to get the rest of the gang and our supplies (i.e. snacks, beverages and our trusty water floaties).  We dignied to a different place and had a great beach day! 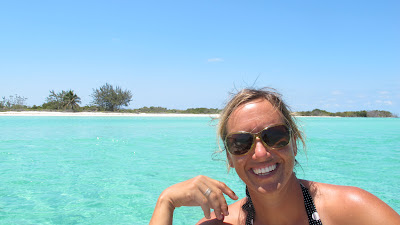 We got up  early the next morning and sailed over to Cayo Cuervo.  The weather has been fairly settled, so we anchored in front of a reef and a little farther away from land so the bugs would stay away.  We jumped in the skiff and checked out the reef on the northwest side of the island.  The water was pretty clear and the coral much prettier than the other Cays.  We didn’t spear any lobster or fish, but we have so much in the freezer, we really weren’t looking very hard for it!
The next morning we got another early start and sailed to Cayo Zaza de Fuera.  This is another mangrove Cay and we really only stopped here to rest for the night before heading to Casdila in the morning.