Our plan was to go from Cienfuegos to Cayo Guano del Este and then to Cayo Largo.  This route takes you through the prohibited zone that is around the Bay of Pigs.  We cut a pretty good edge of the zone and didn’t have any problems as we never saw anyone patrolling this area so far out. 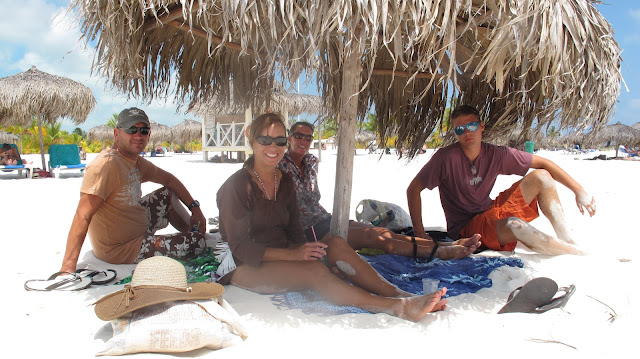 We got to Cayo Guano del Este in the afternoon and it was ROLLY POLLY, so we looked at the guide book and decided to continue on another 5 miles to Cayos de Dios, which turned out to be a really nice Cay and not nearly as rolly.  We only stayed the night and continued on our way the next morning, but later learned that the Cay had some of the best snorkeling in the area, and wished we had stayed there at least another day.
We got to Cayo Largo around noon and was greeted with a Catamaran high and dry on a reef about 500 yards from the entrance.  Evidently, the cat had mistaken the green buoy they had put out to mark the reef with a green channel marker – a good reminder that in Cuba, sometimes they use markers to mark the reef themselves, and not necessarily the channel, so you have to navigate with your eyes and to read the water around these parts and not just rely on your GPS.  Having said that, and earlier stating the channels are usually well marked, we found the entrance to Cayo Largo very confusing.  Now, remember, we draw just under 7 feet, so boats with under 6 feet draft wouldn’t have the same problem that we did.  But basically, as you come into the entrance, you can either go straight, which has channel markers, or you can go to the starboard, which also has channel markers, and there is a sand bar in between the two.  We have a forward looking depth sounder, so we are pretty comfortable going into shallower water, as long as we go slow and there is enough room to maneuver out .  So, looking at Nigel  Calder’s guide, it looked as if we could go to either side, and it looked as if we should go to starboard, so  we started to do that, and we were reading 6 – 6.5 feet.  So, we backed out of there and took the straight path.  It was pretty narrow and led us down a channel with mud flats on our port side and a concrete pier ahead of us.  Then there was a 90 degree turn that we had to do that brought us in front of the marina.  It is a pretty small marina and really tucked back in there and looked buggy, so we made another 90 degree turn and kept coming around, essentially making a giant U shape and anchored on the southwest side of Punta Sirena in about 8 feet of water.   We dignied into the marina to clear in and they tried to tell me that I had to take my boat into the marina to clear in.  I told them that I was not comfortable bringing my boat in there as there was not much room to maneuver and we don’t have the best turning radius.  They insisted that I bring my boat in and I insisted that I would not do that and that I was happy to dingy them out to the anchorage to clear in.  Finally after talking to 3 people and a little more convincing, they got in the dingy and came out to the boat to clear us in. 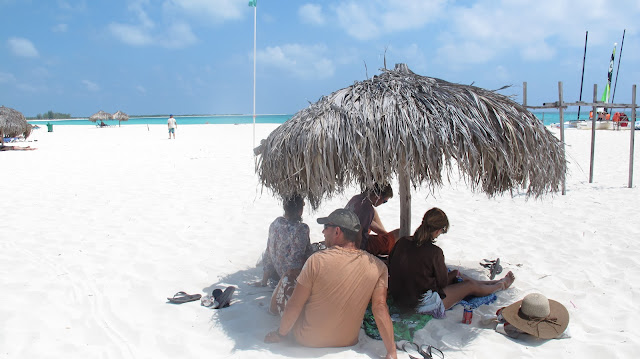 There was a beautiful white beach just off of our beam where we had anchored and Niko loved to go over to it and run free.   The water was a beautiful turquoise color and is deep right up to the beach.  The sand is the softest I have ever felt and so white and clean.  It is a great anchoring spot! 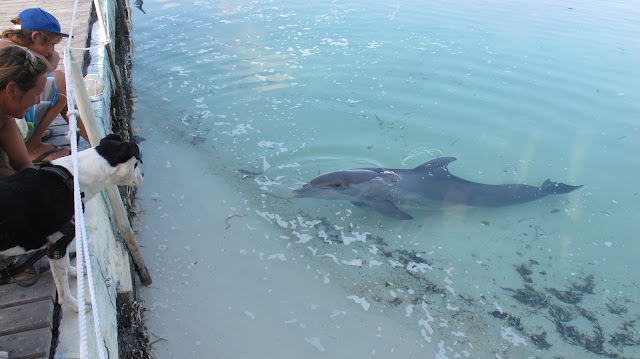 We dignied to the dock and bar, where they have the dolphin enclosures, to walk over to the beach.  The immense span of white sand gave our calf muscles a great workout as we made our way to one of the many palapas lining the beach that gives much needed relief from the sun.  The water was beautiful, the people watching entertaining and the pina coladas, brought to us by the bar waiters, refreshing.  It was a great day.  Once it got later in the afternoon and everyone cleared out, we went back to get Niko so she could romp on the beach as well.  On the way back to the boat, we stopped at the dolphin enclosure, which was closed but there was a roped off walkway that you could get over and get right up to the water.  We stood there with Niko and tapped the water and called to the dolphins.  Two swam over to us and Niko had the time of her life, nose to nose with her favorite animal.  She was whining and barking and making all kinds of noise, but the dolphins didn’t mind and just stared at her.  It was pretty cool.  After a little while, one of the workers there asked us to leave, but did so very politely!
The next day I had the unenviable task of trying to renew our visas.  Canadians’ get a 3 month visa, but Americans only get a one month visa.  You can only renew in points of entry, and the next point of entry for us was going to be Havana.  Our visas’ would have expired before then, so I had to get it done in Cayo Largo.  I was told that I had to go to the airport and see immigration there.  I walked the mile or so to the airport in the heat and asked to see the immigration officer.  I had to wait for about an hour before I asked again, and finally was brought into see him.  Again, he asked me for proof of health insurance, and I explained that I had an international policy, but he said they would not accept it because I was American and no one would insure me if I got hurt in Cuba.  I tried to argue that I was covered, but he told me I had to go back to the marina and talk to the head of Immigration there.  If he would accept my insurance policy, then he would have to call the airport Immigration and I would have to go back to see them.  So, I walked back to the marina in the heat and hunted down the head of Immigration there.  I explained my problem and he told me not to worry about it.  He took my passport and about-to-expire visa and said he would go to the airport and take care of everything and to come back that afternoon.  I was a little hesitant to leave my passport with him, but in the end I did.  That afternoon, I came back to his office and true to his word, he had my passport and a renewed visa!   I chatted with him a bit and he pulled out a picture of his boy and told me it was his birthday.  I caught his drift and gave him a few CUCs to buy his son a birthday present.  Next I had to go to Customs to renew my cruising permit.  All boats only get a one month cruising permit.  This time, everything went smoothly and I received a renewed cruising permit and luckily, the customs officer did not have any children!