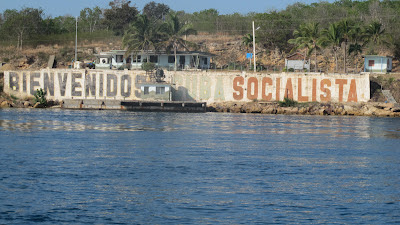 We had an easy downwind run from Casilda to Cienfuegos.  As soon as we sailed into the entrance of the harbor, we were greeted with a huge painted wall that read “Bienvendios a Cuba Socialista”.  Even with my bad Spanish, I knew that it said “Welcome to Socialist Cuba”!  The anchorage is quite a ways into the Bahia de Cienfuegos, but it is a well-marked channel.  We anchored outside of the marina and dignied in to clear in.  All of the offices are right there at the marina and was very easy to check in.  As always, the officials were very friendly and respectful.  We did have to pay to anchor outside the marina, but it was only about $5 a day.  The marina had a nice bar with cold beers and appetizers.  They also have a small convenience store which sells eggs, some canned veggies, juices and of course, rum!  We didn’t find their prices to be much more than the stores in town. 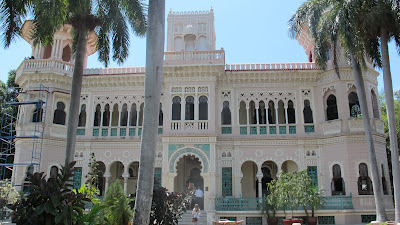 After clearing in and having our necessary cold beer at the bar, we decided to go hit the town.  We walked a little way toward town and came across a local watering hole.  Wanting a little local culture, we decided to stop for a beer.  This was a local joint, with local beer from a keg, and thus local prices – 6 local pesos per beer, plus 5 pesos for the cup, which equaled about $0.25 US for the beer.  To be honest, you get what you pay for, but nevertheless, we stayed for another before we moved on!  We continued to walk in the general direction of town and found ourselves on the Malecon, which is the wide sidewalk that runs along the seawall.  It seems as if the entire population of Cienfuegos was hanging out on the Malecon, so we decided we were in the right spot.  We did as the thousand or so other locals did – bought a bottle of rum, or two, and sat up on the wall and watched the young and old Cubans strut their stuff.  What entertainment!  The guys were mostly dressed all in white – tight white jeans, a loose fitting white shirt and a styling belt and pair of shoes to finish the outfit.  The girls were dressed to kill in the tightest, sexiest dresses or skirts they could find.  And everyone just paraded up and down the sidewalk, stopping to talk to friends and then continued to saunter along.  It was quite a site.  When we got hungry, we walked over to the local Rapido, (their version of McDonalds and KFC combined into one) and fed our bellies.  Then we decided to parade up and down the Malecon, but not as successfully as the locals.  We did met some really nice people though.  We got wind of a concert going on and went to find it.  It was basically pretty bad music set up in a parking lot with a ton of people milling about, so we decided to head back to the Malecon and then back to the boat as it was getting pretty late. 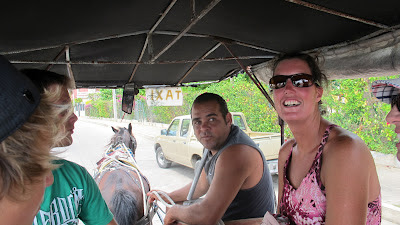 The next morning, we took a horse taxi to the center of town to go exploring.  It was a Sunday so not much was open, but we sat in a pretty courtyard for a while and admired the government buildings.  We walked around a bit and then headed back to the marina.  The following day, we went back to the center of town to see what it was like on a weekday.  It was definitely much livelier.  We traded some of our goods (old clothes, tooth brushes and tooth paste) for some fresh veggies and fruit.  We got some of our much loved street pizza, and then took a bike taxi back to the marina for about $2.
Every time we walked to town, we would pass by a beautiful colonial style building that turned out to be the Cienfuegos Yacht Club.  On our last night we were walking by and all decided we needed to see in side of course we weren’t really dressed for what event they had planed . We to put on our best high class attitudes and face. And made our way up the red carpeted stairs to the entrance of the Yacht Club.  No one even questioned us and we went inside to have a beer.  It was beautiful inside with all old pictures of Cuba and old cups and other trophies from the winners of yacht racers.  They were having a concert at the club later that night, but we decided not to stay as we had to get moving early the next morning, and no one wanted to sail with a hangover!  So, we made the mature decision to boogie home and got an early start the next morning.  The officials are at the marina 24 hours, so we were able to clear out at 6am and be on our way by 7am for the 40 or so mile run to Cayo Guano del Este, which was just a jumping off point to Cayo Largo. 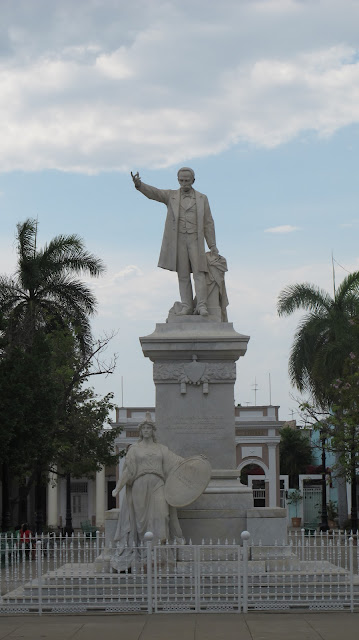 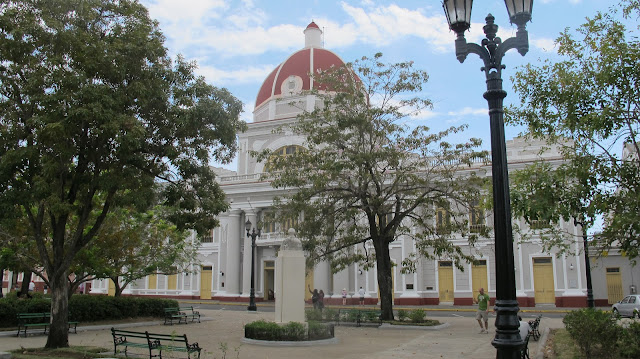 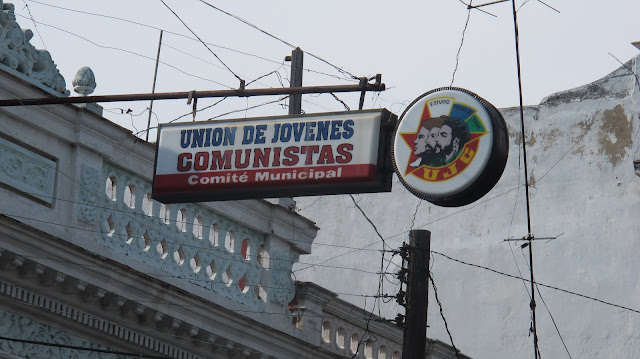 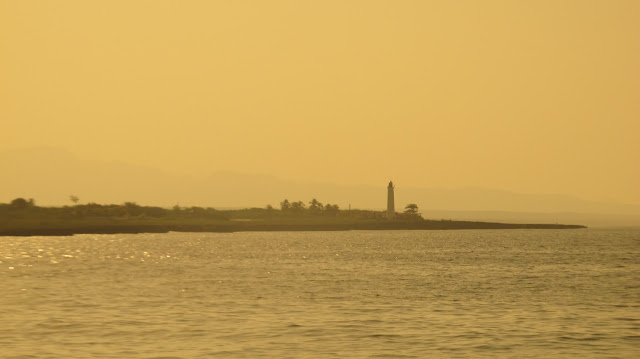