We were getting anxious to see the big city, so after about a month of Cay hoping on the south coast, we decided to set our sights on Havana.  We still had about 350 miles ahead of us, so we wanted to get moving.  We opted not to go ashore on the Isla de la Juventud, although we have heard it is pretty.  We sailed along the south coast of the island and anchored for the night in Caleta Puerto Frances.  It is a very pretty spot with crystal clear water and tons of sand dollars on the bottom.  We timed our departure so that we would round Cabo de San Antonio (the southwestern Cape) during the very early morning hours (i.e. 3 – 4am) because we had read that it can get quite nasty rounding the cape and the best time to do it is late evening to early morning when the winds are at their lightest.  We indeed had light winds and an uneventful passage.
On the way north to Havana, there is a reef that runs for about 120 miles along coast line with some breaks where boats can get through.  Nigel Calder writes that if your draft is 1.8m or less, you can run the entire way inside the reef.  We draw just under 7 feet, and keeping an eye on the tides, we did the majority of the run inside the reef with a few passages outside. 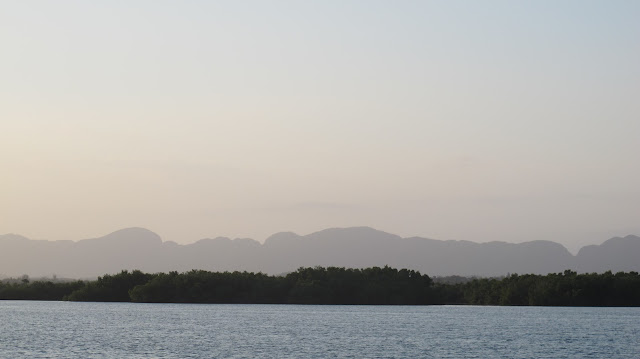