A quick word about Cuba money before I start…there are two currencies in Cuba – the Local Peso “Peso” and the Tourist Convertible “CUC”.  $1 USD = about .90 CUC (almost 1 to 1 less a 10% surcharge).  There is no surcharge if converting Canadian or Euros.  So, once you convert your foreign money, you then take 5 or 10 CUC and convert it into Pesos.  1 CUC = 24ish Pesos.  Now, you can only spend Pesos at the local fruit and veggie market or on street food, which is why you don’t convert too much.  You have to use CUC at restaurants, bars, grocery stores, etc.
Okay, now that we have that out of the way, we found the local bus by the marina, paid 1 Peso and hopped on.  Now, I used to live in NYC and took the buses in the city and I thought they were crowded – Holy Cow, they have nothing on Cuba.  There must have been 100 people on it!  We bounced and sped around corners – stopping every few minutes to pick up more people.  Everyone was very polite – men would give up their seats for older women or for women with small kids.  About a mile away from Santiago, the bus stops.  “Que pasa” or what I hoped was “What’s going on” in Spanish to a woman sitting in front of me who had kindly held onto my bag for me so I could hold on to the rail with two hands so I didn’t go flying.  “Roto” she said…broken.  Oh boy.  In my broken Spanish and her broken English, I figured out that we weren’t too far from where we needed to go and she suggested we walk.  Just as I yelled down the bus to the other troops that we were going to do that, a bunch of guys got off and started pushing the bus down a short hill.  The bus driver than popped the clutch and the bus started.  A great cheer rang throughout the bus!
We got off at one of the squares where there is a huge cathedral at one end of the square and the town hall at the other.  A fellow came up to us who turned out to be one of the custom officials from the previous day and offered to show us the best place to change our money.  You can change it at a bank, but the line is super long, so they also have places called Cadeja which only deals with changing money.  After that, he introduced us to one of his friends and told him to show us a good place to eat for lunch.  So, we followed his friend to a house and showed us inside.  We walked through a woman’s living room, through a small courtyard where laundry was hanging out and into a small room with 3 small tables, a fan and a stereo.  This was the “restaurant”- really a room in a private house where they cook great meals for you.  We had a cerveca and looked at the menu.  Everything was 10-12 CUC – a little more expensive than I would have thought.  We said as much and they knocked the price down to 8 CUC.  We got chicken, rice, a salad and fried plantains.  Not too bad, but still not the deal I would have thought.  Well, we were right – as we later found out, there are much cheaper ways to eat in Cuba.  But, for our first meal, it was pretty good with an awesome atmosphere!  As we were waiting for our food, we took a 15 minute walk around and saw Fidel Castro’s old house and the outside of the revolutionary museum.
After lunch, we walked over to a place called La Casa de Tradionales where they supposedly make the best mojitos in Santiago.  I would have to agree with that statement.  The bartender lovingly made the mojitos – not like in the States where they mix everyone’s drink in a big shaker and then pours it into a glass.  Oh no, here they put out the glasses, then add a little cane sugar, then a little lime juice and takes a small spoon with a long handle and mixes it around.  Then adds a lot of mint, stirs again, then a ton of rum and some soda water and stirs it a final time.  We brought the drinks out to a little patio under a shaded area made from vines and oh my gosh, it tasted like heaven! 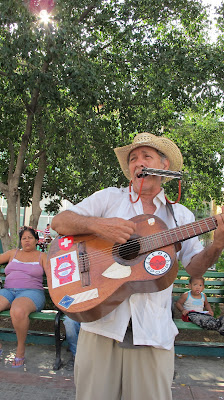 We met up with Josh and Connor by this point.  Those two decided not to have the expensive lunch meal and instead went out in search of street food.  Boy oh boy did they find a deal.  Josh and Connor split 4 mini cheese pizzas, 2 chicken sandwiches, a large tub of ice cream and 2 sodas, all for around 70 Pesos, which is less than 3USD!  Now that’s a deal!
We made our way back over to the square where the internet place was.  I had to shoot out a few quick emails and check on my health insurance stuff to make sure Cuba is indeed covered.  The internet was 6 CUC per hour and was PAINFULLY slow!  No posting pictures on the blog while in Cuba! 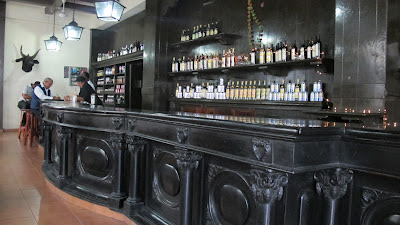 While I was doing this, Maria, Kevin and Dena where in sitting on the benches in the park people watching and enjoying the cool shade.  We had brought candy for the kids and soap for the adults, as we had read many people come up to you asking for soap.  This is an understatement.  I could have given away 20 bars of soap the first day in Santiago.  Deanna took out some of her stash and almost got trampled over!  After I finished on the internet, I joined them and a street musician with a guitar and harmonica struck up a conversation with us and then treated us to two great songs. 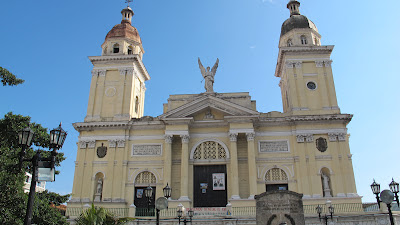 We continued to wander around the streets and stopped in another bar just to make sure the first really did have the best mojitos.  We found a second place with a beautiful dark wood bar that made you think you were in a bar from the 1950’s.  We sampled their mojitos as well and they were good, but not as good as the first place.  We had a second one just to make sure though! 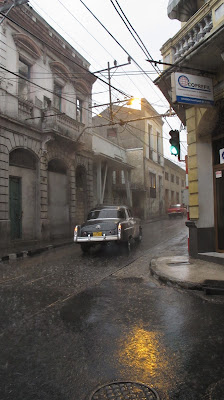 We hit the streets again and strolled around for a couple of hours, sampled some 5 peso street pizza which was really good and then followed our ears to a place that had a band playing traditional Cuban music.  It turns out we found the site of a 3 day music festival!  Every hour, a different band would play and people were dancing the salsa inside, outside, wherever they could!  We joined in the outside party and danced in the streets with whoever came by and took our hand.  Man can they move their hips!
After a while we decided to call it a night and found a cab and for 10 CUC the six of us jammed in the back of a Russian built car and headed back to the marina.